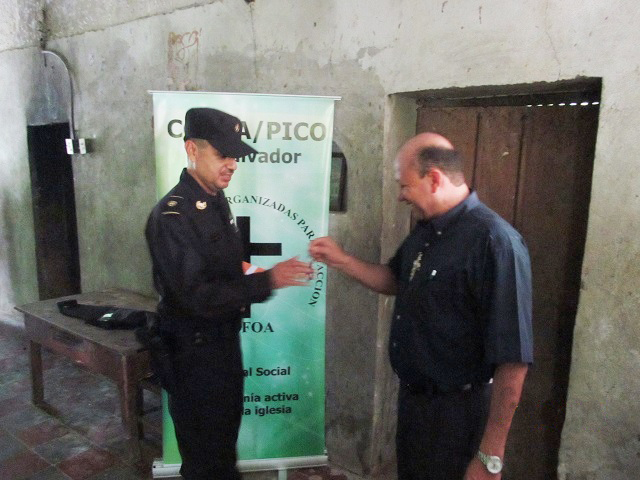 Residents call for immediate installation of a police station. Gang members have threatened the local priest; gang members say they want to take care of the canton because it is their territory. If removed, “they will demand payment” from all residents of the canton.

One night in early 2013, Hyginus (his name changed to protect his safety) was walking along a path in the Canton of Barahona in the city of San Pedro Masahuat in the department of La Paz. He was going to his house, deep in thought, with the machete under his arm, when suddenly he met a group of young strangers.

“What’s happening?” He said. To Hyginus, a man who is over 70, without a degree but well educated, was surprised by this expression that he would soon realize was a form of greeting by these young people. One farmer only managed to answer: good night as a greeting.

Hyginus soon learned that those young men were members of the Mara Salvatrucha (MS) who were coming to the canton to claim it as “territory” for MS.

Since that night, Hyginus does not show his machete. It is a very heavy burden, he says, if you have to defend yourself. Like him, other men always carry their machete, ready to “crack the leather” as Hyginus says, with the gangs that have stolen the peace they had more than a year ago.

In the canton Barahona a battle is being fought between the community and more than twenty members of the MS who have struggled to settle there for the past year.

This fight to keep the place free from gangs that became public a few weeks ago has already resulted in death threats to the Fr. José Fidel Cortez, the Pastor of that canton, who has decided to stand with his parishioners and disregard the threats that have been made to his colleagues and some residents.

Opposition by Fr. Fidel to the settlement of gang members in Barahona began last year, a few months after some gang members residing in neighboring counties or cities began arriving to give away marijuana and claim a few homes of locals who are in the United States, as have some neighbors in Barahona.

Friction between gang members and the priest appeared when two young people with parish chores neglected those duties having fallen into the clutches of marijuana.

Some locals said a gang member nicknamed El Chino began to connect to Barahona by giving away marijuana cigarettes as a strategy to create a new market: once some young people liked the drug, he began to sell it.

Called to not fear

In 2013, Father Fidel organized a march in the canton to speak out against violence to keep this place free of the violence that gangs cause.

That same day, during Mass, he denounced several drug dealers. He did so with loudspeakers so several gang heard the accusations. This initiated the problem between these criminal groups against the community, neighbors say.

On Saturday August 30, the entire community of Canton Barahona gathered outside the Catholic Church. The police summoned all the young people of Canton that had already been recruited by gang members residing in the town of Rosario de La Paz and Canton La Flores.

Some of these gang members attended the meeting, which was also attended by the mayor of San Pedro Masahuat and officers of the Gang Unit and representatives of an NGO, COFOA (Faith Communities Organized for Action), an entity that responsible for training community leaders, explained its regional director, Alberto Velázquez Trujillo.

During that meeting, attended by about 150 families, the community forwarded proposals to put stop to the violence in that canton.

At the same meeting, gang members form other places were warned to stop coming to the Canton to recruit more young people to take part in criminal activity.

Gang members who were originally recruited in that place were called to rejoin the honest and hardworking community and voluntarily surrender their weapons; and in return they would not be reported.

Gangs present at the meeting were given a letter written with the agreement of community leaders.

The document expressed that everyone in Barahona was tired of having to hide in their homes and live in fear of what might happen to their children.

It also said they were willing to take any and all necessary measures, within the law, to ensure order and peace in the canton and the surrounding areas.

They ask for police presence

Both Fr. Cortez, Barahona residents and community leaders said that after many calls, police have increased their presence there, never the less, they understand that San Pedro Mashuat is the third largest town in the department of La Paz so they cannot expect too much from the NCP serving the city.

Therefore, residents of Canton Barahona asked the police to install a police station in the Canton to advance this proposal that seeks to put an end to violence in Barahona.

They called on the Attorney to do better investigative work, because experience in the previous week has left them somewhat disappointed.

Isabel Sibrián and one of his grandchildren, a leader of the MS called Pocho or Dope, were arrested last week after they were found with two pistols and a shotgun. But after three days, the grandfather and grandson were freed.

Residents Barahona estimate there are more guns in the hands of gang members who live there and others who are arriving from Las Flores and Rosario La Paz and the canton Tunal, including those called the Hammer and the Chinaman.

Warnings by MS if they are removed from Barahona

Although criminals have not yet killed anyone in Barahona, they have done so in neighboring cantons.

Neighbors say a few days ago, a former PNC who resides in Barahona was surrounded by at least 25 gang members who told him that they want to stay in the area because they are claiming it as their territory. Another gang member told them they received orders from prison that they may not leave the canton because of the people. In Barahona, people no longer fear the gangs they have faced and seem determined to defend the peace and security that was alive until about a year ago.

The battle between neighbors and members of the MS continues.

According to locals, the last two threats say that these groups can take on the priest, who said to be the head of the community initiative to expel the gangs from Barahona.

Because of this, the MS gang members of Rosario La Paz sent a death threat to the pastor. The second threat is that if Barahona removes the MS, gangs form Las Flores, Rosario, and Miraflores will immediately begin to extort money from all residents of the county.

When Wilber heard about the death of sixteen year old Cindy Vides, he was moved…