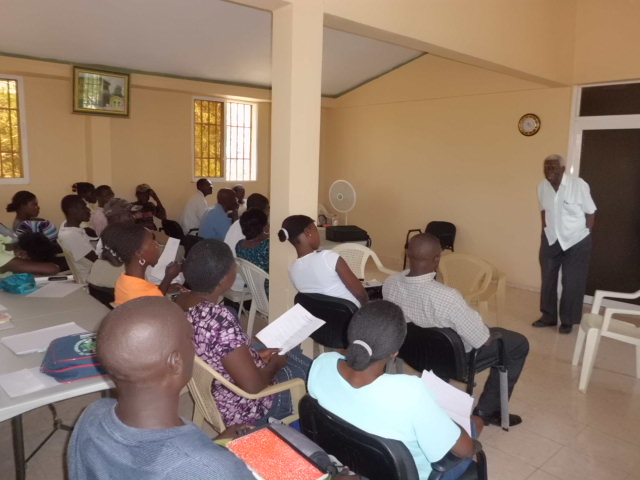 In July, the steering committee of the People’s Ecumenical Organization of the Northeast Department (OPODNE), held their first leadership retreat, led by PICO consultant Francois Pierre-Louis.

Founding OPODNE members worked together to learn more about PICO principles, finalize a budget and develop plans for the coming year. They reviewed the history of PICO and the use of power, relationship and action, to prepare for formation of Local Organizing Committees in the towns they represent. Francois elaborated on PICO principles, including the core principle that “power is in the relationship”. The participants and Francois discussed several examples to illustrate the meaning of that principle.

Francois observes that power is the ability to act, and without relationship, power can become tyranny. As leaders develop relationships with parishioners and community members through one to one conversations and increased knowledge of key issues that are being surfaced, they are more likely to mobilize others to act in their self- interest. Action gives life to an organization, providing leaders with the opportunity to learn from each other and assess their leadership.

Francois introduced role plays of scenarios in which the principle of power in the relationship could be applied. Since then, steering committee members have begun meeting with priests and pastors to recruit more congregations and begin building Local Organizing Committees in Ouanaminthe, Fort-Liberte, Terrier Rouge, Trou du Nord, Capotille and St. Suzanne.

Your Support Is Changing the World

PICO is making a difference in rural Northeast Haiti, training leaders who have started viable…

Haiti: Faith in Action affiliates in Haiti, Central America and the U.S. join together with allies to press for changes in U.S. policy