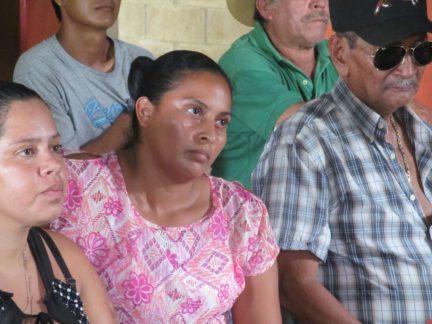 COFOA leaders of the northern Lempa Valley communities met on Wednesday, September 6, with Marvin Pineda from the Ministry of Public Works (MOP) to learn about the design status for the bridge to be built on Rio Roldán. Mr. Pineda described the proposed design and explained that Minister Gerson Martinez was looking for needed financing.  Community leaders were agitated to learn that the bridge could not be built until next year.

A leader of the Linares community in the municipality of San Agustín reminded Mr. Pineda, “At the meeting held on March 16, the Minister promised the community that the bridge would be built within six months.  Why does he now say that it will be until next year? The community is going to have to talk again with Minister Martinez “.

The Rev. Antonio López also reacted and recalled the phrase of Jesus Christ that the Minister used at the March meeting when he gave his word that the bridge would be built by the middle of this 2017:  “When your word is yes, let it mean yes”.  When asked, “Why there is no money for the bridge over the River Roldan while there are big projects  in San Salvador?”, Mr. Pineda replied, “That this is where the city is.” Father López responded, “This is discrimination against rural communities.”

At the end of the meeting, since there was no concrete response about the construction of the bridge, COFOA leaders and MOP agreed to resume the meetings of the emergency commission, which was formed at the suggestion of Minister Martínez to give continuity to the Rio Roldan project. The next meeting to discuss concrete proposals was scheduled for Wednesday, September 27 at 10:00 am at city hall in Jiquilisco.

Leaders are waiting for the outcome of that meeting and, depending on the response, will plan their next steps.  They are firm in their commitment to hold Gerson Martinez to his promise to build the bridge.

Amazing Progress on the Health Clinic in Rusumo

Rusumo leaders are making rapid progress in realizing their vision for a community health clinic. The foundation is…