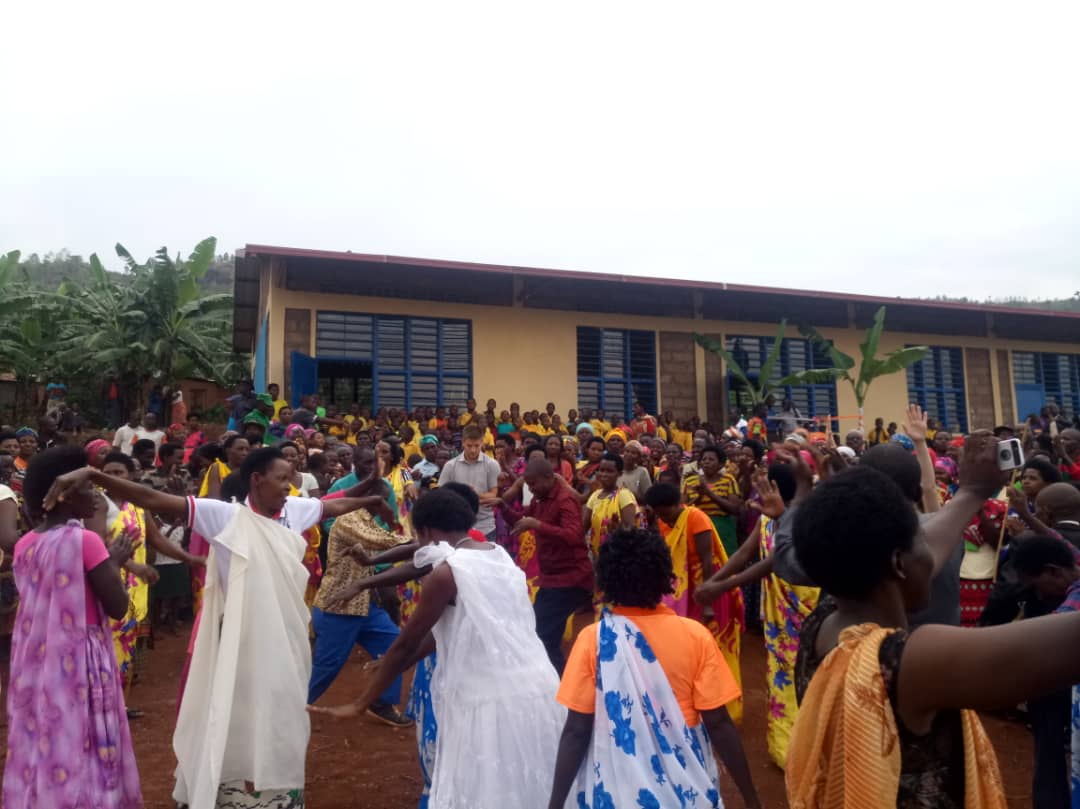 Hundreds of Cihya villagers danced to celebrate the completion of their new elementary school. Concerned that their children had to walk five kilometers to get to school, villagers launched this project just six months ago. With the support of veteran Mumeya leader, Ezra Nkubana, a leadership team in Cihya obtained signed pledges for labor and financial support from villagers.  Leaders leveraged these to secure government commitments for an engineer and building materials. Hundreds of villagers organized monthly work crews to lay the foundation and construct the walls for the school.  We are grateful to Luther Place Lutheran Church in Washington D.C. for thier financial contribution used to provide doors, windows and roofing. Pr. John transported these materials to the site with his trusty green machine and trailer. Now, a committee of Cihya leaders has formed to improve the environment by planting trees and shrubs before students begin school in the fall. Another group of Mumeya leaders used this same process and just completed construction of three additional rooms for their high school.

Rwanda: Other places your support is making a difference

With the dry season in full force, PICO’s Nyange cooperative has wasted no time on breaking ground for their new toilet project. Building modern toilets is a major priority for the cooperative because it is a necessary first step for pursuing some other projects the cooperative has planned. Nyange hopes to make the most of its prime location (right off the main highway between Kigali and Kibuye) to construct a full rest-stop, complete with a parking lot, a produce stand, and benches. The space will also be used to host local sector leaders and other groups and individuals who are interested in learning about the cooperative’s operations. The cooperative members are eager to get these toilets up and running so that they can bring their entire vision to reality.

While the cooperative is looking ahead to future projects, it is also focused on growing its current tile and brick business. Nyange members are spending eight weeks this summer working with two students from Santa Clara University’s Miller Center for Social Entrepreneurship to co-create a business plan for scaling its tile and brick operations. With booming development in Rwanda, demand for Nyange’s materials is much higher than its current production capacity, and local government leaders have ensured the cooperative that if it is able to increase supply, the government would be interested in purchasing higher quantities of tiles and bricks

Annual goal-setting for the upcoming July 2019 – June 2020 year is in full swing, and the PICO Mumeya leadership is eager to build a sustainable business so that they can use the funds to continue uplifting their cooperative members and the surrounding community. Mumeya is the first cooperative that PICO began working with in 2006 and has since become a leader in the PICO community, often traveling to work with and instruct other cooperatives. The first need the Mumeya cooperative addressed was providing health services to the surrounding community. Most recently, a new elementary school opened in Cihya – a project successfully completed thanks to the expertise of Mumeya’s leadership team in facilitating collaboration between communities and the local government. With the clinic serving patients non-stop and children in their new school, Mumeya is ready to pursue its next project.

Mumeya cooperative members have spent several years imagining a sustainable business venture and are ready to take the necessary steps to make it a reality. Mumeya wants to start a crop-selling business that will allow the cooperative to capitalize on the bountiful local agricultural resources. The plan is to buy corn, beans and sorghum from local farmers during harvest season; store them in their community building; and resell to markets in Kigali during off season. The cooperative members are spending eight weeks with two students from Santa Clara University’s Miller Center for Social Entrepreneurship, who will accompany Mumeya in co-creating a business plan for the new venture.

Dear Friends, I am writing to share highlights of this past year from our international…

“United we are stronger”

El Salvador: “United we are stronger” is the banner under which 100 COFOA leaders from…