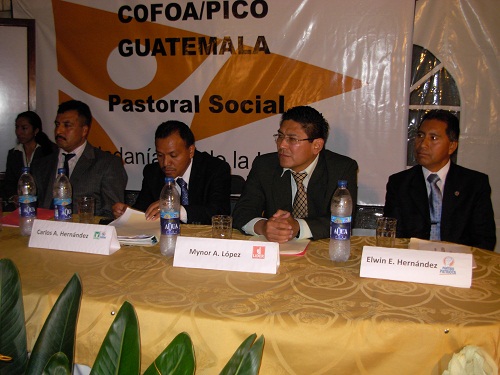 COFOA Guatemala held their first candidates’ night on August 13th. Despite a heavy rain storm, 800 people turned out for the forum, along with all four mayoral candidates. COFOA leaders, with minimal staff support, organized the event themselves, and it was a huge success.

Candidates were given clear guidelines and were warned that if they attacked other candidates instead of responding to questions, the sound system would be turned off. One candidate attempted to focus on his competition, and the system was turned off- and it didn’t happen again!

Candidates were asked to respond to the main issues surfaced in COFOA leaders’ listening campaign: city clean-up and trash issues, opportunities and activities for youth, safety and security, and drug and alcohol abuse issues. All candidates came prepared to respond, including sharing written plans and platforms which COFOA leaders now have in order to hold them accountable.

All of the candidates agreed to meet with COFOA leaders within 90 days to discuss how the Office of the Mayor and COFOA can work together to resolve these issues. The election was held on September 11th and, unlike the last election in Guatemala that was marred by violence throughout the country, went fairly smoothly.

How it adds up

We are so proud of the unstoppable leaders in El Salvador, Rwanda, and Haiti who…