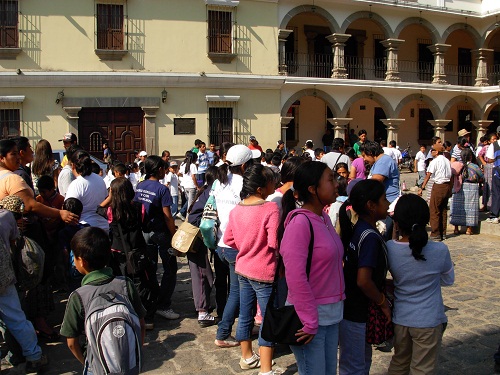 COFOA Guatemala leaders in San Antonio Aguas Calientes have begun a long-term environmental awareness and clean-up campaign. They want to improve the health and safety of their city and attract more tourists from near-by tourist mecca Antigua, to boost the local economy.  In April they mobilized over 500 community members, including a large contingent of youth, and collected over 500 large trash bags of garbage.

The clean-up campaign is bringing together community groups, local authorities, churches of different denominations, schools and non-profit organizations that are working together for the common good of their city.  COFOA leaders have held research meetings with public officials and are boosting awareness about the impact of going green and beginning to recycle across the community. The Ministry of Health made a presentation to leaders to educate them about the importance of recycling, and leaders decided to launch a major campaign this October through one-to-one conversations to build momentum around recycling. They have identified several sites where people will be able to drop off paper of all kinds, and have gotten an agreement from a recycling company to purchase the paper with the proceeds going toward future COFOA activities.

Research meetings with the Ministry of Health also revealed the government’s efforts to combat dengue fever, a mosquito-borne disease that is very dangerous for the young and the weak. Open water containers of any kind near a house – plastic bottles, old tires, old metal containers – are breeding grounds for this insect. The Ministry of Health asked COFOA leaders to add information on removing potential breeding containers as part of the recycling campaign, and to collect this type of trash in or near households and take it to the dump. COFOA leaders agreed and will go door to door this October.

For more than 30 years, sixty families in the Monte Cristo community have not had…

Gabriela is 22 years old. She lives with her grandparents in El Salvador. Her parents…