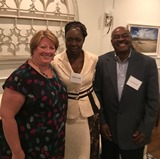 Haiti: Nearly thirty people gathered at the home of Karen Ansara to hear the story of PICO organizing in Haiti and lend their financial support. Thank you, Karen!  Boston is the home to a large population of Haitian diaspora, seeking to find ways to make life better for their family and friends in Haiti. Present for the event were notable Haitian philanthropic, academic, faith and political leaders and their friends.  Florcie Tyrell’s story of her personal journey from poverty to the position as OPODNE’s director moved many people. OPDNE founder, Francois Pierre Louis, shared the story of his work to overthrow the Haitian dictatorship in the 1990s that resulted in death threats that forced him to flee Haiti. Faith leaders invited Francois build a new organization in the Northeast four years ago. In partnership with Florcie and faith leaders, they founded OPODNE are developing leadership teams in all the towns of the Northeast Department. OPODNE leaders are working to overcome poverty, exploitation and the culture of corruption. They are establishing self-governing organizations and economic development cooperatives. Financial support for leadership training and seed funds for economic development projects is critical to the success of this effort.

We are grateful to Lew Finfer, Executive Director of Massachusetts Action Network, who joined Karen Ansara in organizing this event. MCAN has been active in organizing the Haitian community in Boston and leading efforts to oppose the Trump administration’s decision to end Temporary Protected Status for Haitians who emigrated to the U.S. after the devastating 2010 earthquake. It is our goal to collaborate with other Faith in Action (PICO) affiliates along the east coast – Massachusetts, New York, New Jersey, Pennsylvania, and Florida – in the fight for the most vulnerable Haitians, in both the United States and Haiti.

We truly appreciate the powerful support of Karen Ansara, Principal of Ansara Foundation, and Lew Finfer, Executive Director of MCAN. Thank you!

Haiti: Thanks to you, OPODNE is responding to pandemic in towns across the Northeast