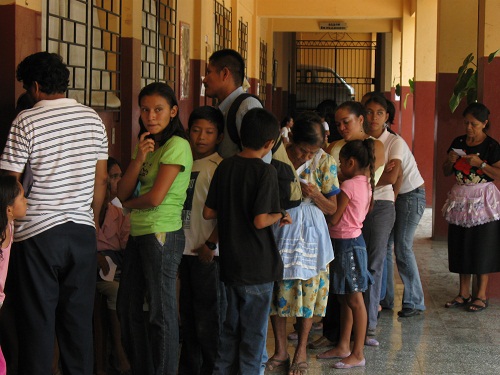 Leaders decided to organize health fairs to respond to immediate needs and raise awareness about people’s rights to health care, while encouraging broader participation in organizing around this issue. Nearly 3000 people have attended eight COFOA health fairs and have received medical attention in four towns.

In 2010 COFOA formed a federated committee of leaders to do research and look into broader solutions to health care issues. Five hundred leaders held an action in 2011 to present their ideas to local health officials, but the officials refused to attend.

According to the constitution of El Salvador, citizens have the right to lodge formal complaints and the government is required to respond in writing. Therefore COFOA has developed a platform of health improvements to present to the Vice Minister of Health in an action planned before the end of the year, and she has agreed to attend. The platform was developed through one-to-one conversations and a survey of 1350 people, and includes 24 hour clinic operation, birth delivery/gynecology and minor surgery rooms, greater access to medicines, and sensitivity training for health care workers.

This May, fifty COFOA leaders completed a six month training program on the social doctrine…

“Working together, we have accomplished some projects that have been a real benefit in our…

Like everyone, Florice Tyrell and other leaders in Terrier Rouge are facing significant challenges. Their…