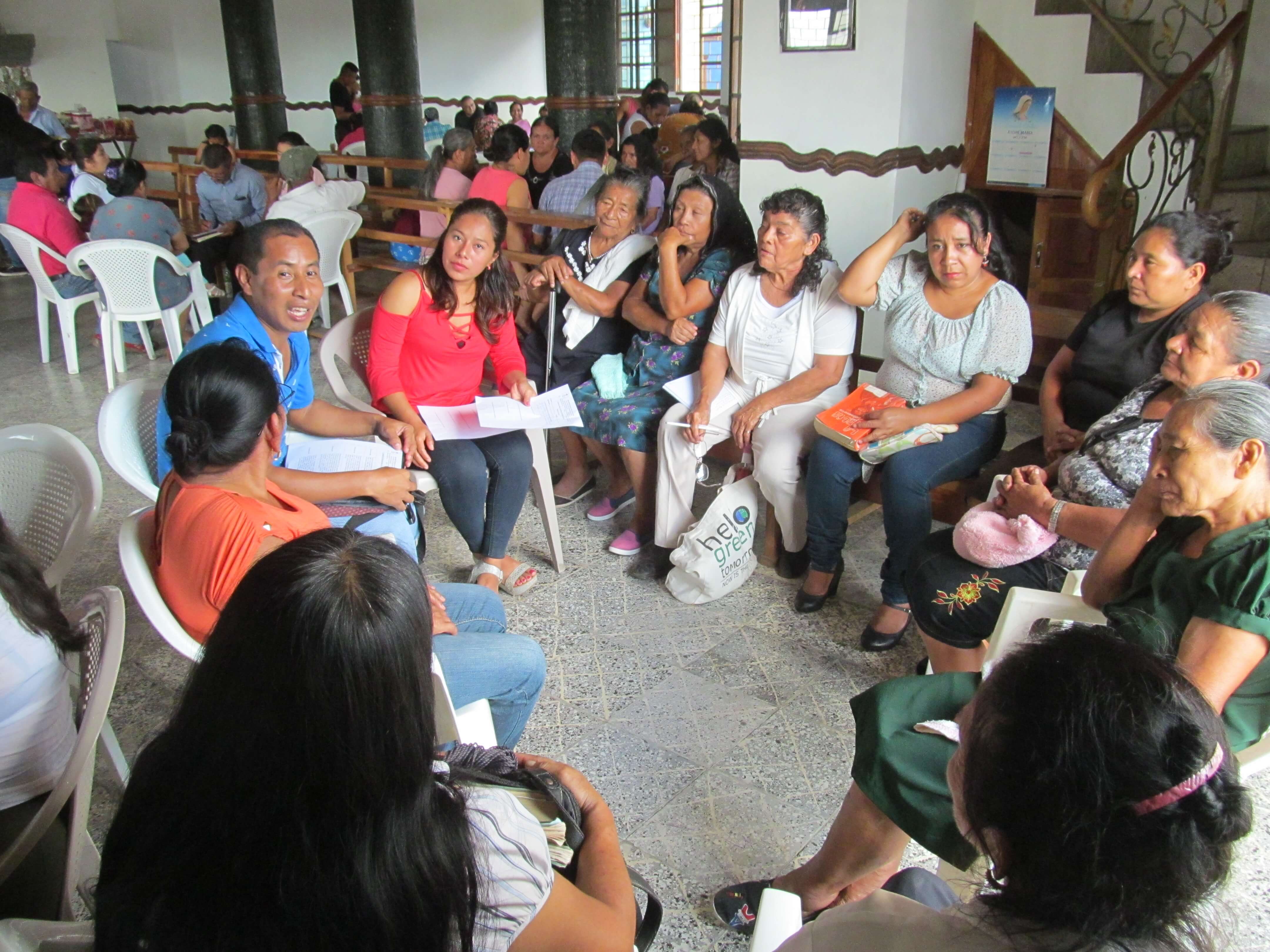 El Salvador: “We have not had water for three months, but we still have to pay the bills. Some of us use rain water and our children are getting sick. Many spend another $30 each month to buy bottled water. Political leaders are doing nothing,” says Wilma from Santa Maria Ostuma. Testimony like this has been emerging from listening sessions in communities across the La Paz Department. COFOA will mobilize this voice of ordinary people at an action on September 22nd where they will demand that their representatives proclaim water a human right and oppose legislation to privatize water. The longer term fight is to create a system that delivers clean, affordable water for everyone. “Water for me. Water for you. Water for everyone.”

COFOA has gathered hundreds of people in small group settings after church services and in community meetings to discuss these questions: What are the problems with water in your community?  How do these problems affect you and your family?  Who is responsible for solving these problems?  How do you think they can be solved?  What are you willing to do to solve these problems?

The problems are broad and varied. Comments include, “Many homes do not receive water.” “We get bills even if we don’t get water.” “Sometimes water is shut off without warning” “Families have to walk great distances to get water from the river” “Our children are getting sick from contaminated water.” “We pay $30 for water service we don’t even receive.” “We spend $25 to $30 more each month for bottled water.” Everyone agrees that these problems need to be fixed. We bring these problems to our mayor and to ANDA, the national water regulator, and nothing is done. Everyone is willing to get involved. Everyone agrees to the three campaign demands. – “no” to privatizing water; “yes” to a constitutional amendment guaranteeing water as a human right; and “yes” to the general water law that requires government to regulate water. It is time to see if our elected representatives will stand with us and act.

COFOA has participated in national coalition efforts for more than five years. COFOA’s listening campaign is adding an important new component to the national mobilization, led by Archbishop Alas, Cardinal Chavez, and the Jesuit University that is focused on gathering petitions aimed at influencing legislators. COFOA has gathered 15,000 signatures, more than any other dioceses in El Salvador. COFOA leaders believe that long term solutions to the water access and other issues requires ongoing civic participation and political accountability.

Political polarization of right and left has prevented any effective action for five years. With its recent ascendancy, the political right is advancing legislation to privatize water. Ninety percent of surface water is contaminated. The cost of treating contaminated surface water is quite high. As a result, much of the potable water used in the country must come from wells that tap the country’s underground aquifers. However, the country’s aquifers are being drained faster than they are being replenished. Water runs off instead of soaking into the ground due to deforestation, intensive agriculture in sugar cane zones, and increased urbanization.  In addition, there is increasing demand for water from industry and from residential areas hooked into water systems supported by wells.

Would you like to join a delegation to El Salvador – January 22 to January 29?