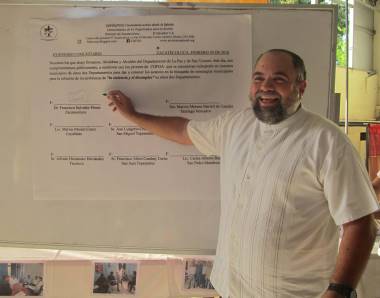 In their first assembly, 350 COFOA youth leaders launched the “More Employment and Less Violence” campaign. After they shared stories about how violence and lack of employment are affecting their lives, they turned to political leaders from the La Paz Department to sign a pledge of support. Zacatecoluca Mayor, Francisco Hirezi, gave the most concrete response promising to work with youth leaders to identify resources needed to make a difference. This action was organized by 60 youth leaders from eight parishes who participated in the “I am a leader!” training sessions for the past six months. While youth regret that many politicians refused to show up at the assembly, they pledged continued efforts to get results. In El Salvador, 56% of the population is under 30 years. Violence and extortion are displacing thousands.