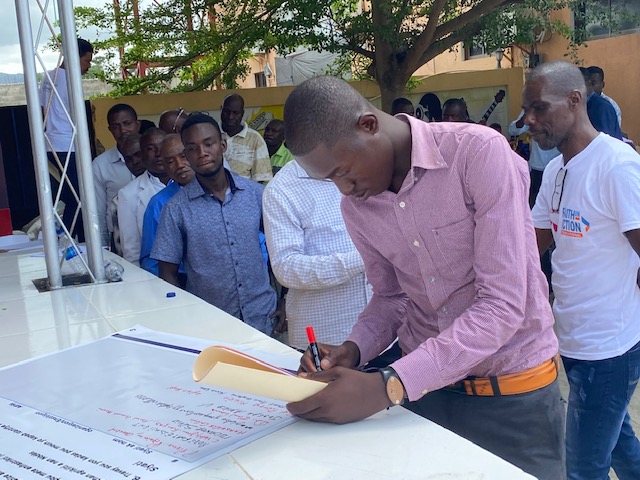 With hunger rising and the fall planting season coming, over 300 leaders and allies of the People ’s Organization Working for the Development of Northeast Haïti (OPODNE) gathered for their general assembly in August. They unveiled a campaign to promote agriculture and fight hunger. Dozens of mayors, civic, religious, and community leaders joined the call to plant today so we can feed ourselves tomorrow, by signing a covenant to support OPODNE’s demand for government, NGOs and the private sector work through local farmers to combat hunger, restore the “Konbit” (working together) movement, provide seeds, tools, technical assistance, and financing so that Haitians can restore their capacity to feed themselves, instead of being dependent on imported food. OPODNE’s immediate goal is to get United States Aid for International Development (USAID) to provide funds for seeds, tools, and fertilizer so farmers can plant this season.

Today, more than 5 million Haitians are going hungry because they can’t afford the price of imported food items, while the land stays fallow. Although USAID and Non-Governmental Organizations (NGOs) claim they are investing in agriculture, 4,000 farmers who were engaged through OPODNE’s listening campaign in 22 localities said they did not see any results.  From this campaign, OPODNE found that the most pressing issues are the inability to buy seeds, fertilizers, and lack of tools to make the land worthwhile to cultivate.

While OPODNE leaders are determined to get government to work for ordinary people, they also used the General Assembly to model and celebrate what accountable leadership looks like. In addition to signing the covenant, a team of leaders elected in each of 22 communities took an oath to serve their community, sang the national anthem, broke bread, and united in song. OPODNE is the change they demand.